So I thought I'd post my views on the Tmobile/Danger outage along with the massive amount of views that have been plastered all over the world of twitter and large volumes of cloud bloggers. I wont go into technical detail on the outage, I'll be going philosophical on the whole thing.

First question being asked is was it the Cloud that failed? First things first, I (and many others) have mainly been pissed off with the fact that a vast array of short sighted people and reporters have quoted this as being a "Cloud" failure, I wont go into definition of Cloud as I've got many posts that provide this (and still continue to do so as Cloud Evolves), but what I will say is that this outage was by all means not a Cloud issue. Yes I repeat it was not Cloud issue....the issue was a managed service issue, a service that was being managed by Danger that T-Mobile outsourced to Danger, and Danger were obliged contractually by Tmobile to provide relevant services. Turn the clock back 5 Years and this outage would have been described as just that... an Outsourcing failure. Its important to state that the delivery method of the Cloud didnt fail to end users (the internet)....the Cloud Computing/storage strategy didnt fail (hardware did)...the crux is the managed service companies obligation and duty of care to operate it successfully failed.

Now flick to the other side of the coin....Danger were paid to provide a service and software to Tmobile, that payment was probably bare minimal cost base and tightly screwed down on overall price with absolute zero investment in any extended expensive SLAs with them, and obviously as Tmobile is the only operater with egg on there face here they were the only Operator to use Danger services and thus most likely the primary source for Infrastructure Investment fund for avoiding such outages, as anyone in business knows a single large customer is never enough SO before your eyes is a complete vicious circle of why this thing was doomed to fail...Two companies hedging bets basically on a business model supported by shoestring Infrastructure services and trying to reap every reward going financially.

"Everything happens for a reason"

Now that rant is over I provide reflection on why I think this outage was a good thing.

Sadly with the evolutional theory of natural selection this little chick of MS Danger had to fail to make the current leaders in the Cloud industry stronger and more capable. And with this outage I wonder how many of these Cloud/Managed Service providers reviewed backup and continuity strategy this week ;). Think of it as a lesson learnt, a lesson unfortunately learnt by Tmobile whom I am sure will settle in court and make lost revenue back and the consumer whom will also gain recompence.

And this lesson is one that can be taken on board by every aspect in the dark world of IT services and outsourcing, this goes from the bare basics of the Outsourcing of IT Services model where "Your mess for less" mentality is strive through to the bleeding edge side of IT within the Cloud world of services such as Amazon EC2 and many other cutting edge suppliers that are still yet to break the adoption curve into mainstream due to less high profile outages.

Additionally on this Mr Vinternals provided an excellent view point where he highlighted that example issues can additionally be used for you and I who most likely struggle to educate management on the phrase "you get what you pay for", and I add to this that the lack of visability on what your purchases and using for services no matter how good or reputable a service provider is should never be taken for granted. An example of this is the other high profile outage this week of a very reputable airline's primary reservation system which was being hosted in a managed service datacentre run by THE biggest and apparently most reputable managed service provider....Unfortunately I can't probably use the Phrase "You get what you pay for on this one" for services not granted but this guy really really made my day when I read this

Part two of my "Cloud are you ready" series focuses in on Platform as a Service or more commonly abbrieviated as PaaS. Now one has disclaimers with part 2 and 3, and that is I am an Infrastructure guy, I am not skilled and greatly knowledgeable on application architecture, that withstanding I am aware of emerging trends and strategy which is present in most of the cloud based technology and the emerging strategy from vendor PaaS offerings. Hopefully you won't be disapointed that this will not focus as much on cloud readiness as Part 1 as it will focus on fast facts picked up during research activity on current PaaS solutions and strategy. I wouldnt want to blog about something as a little knowledge has potential to be dangerous, I merely provide running views and opinions gathered.
Myself like many Infrastructure bods are seriously having to learn a lot about PaaS and SaaS strategy extremely FAST, this certainly shows that the Infrastructure bods which used to just be only concious of the bottom of the stack need to focus and diversify on alternate datacentre strategies and methods for delivery of core services. I am mightily interested and also quite concerned by the potential power of PaaS and SaaS to change the model for how Infrastructure delivery methods work. I am concerned if I don't get a grip on the basics of PaaS and SaaS I will be left out in the cold and app teams will start to scale environments and supportive IaaS which with "Cloud" simplifying strategy I am very skeptical this won't turn into the same as issues that occur in common architectural strategy by app bods doing this in todays world.
Now PaaS i've heard of that...
PaaS is growing exceptionally fast and has large volumes of industry interest, one of these reasons is mainly due to PaaS having app development at its heart still and the fact that coders beaver at code and they can still code happily away with PaaS. New PaaS strategy means there isnt "as" a initial massive shift compared to say changes that have occured in IaaS on how things get delivered.
Key advantages with Hosted PaaS cloud solutions for developers is they can code anywhere with anyone through central repositarys across the internet, example PaaS cloud providers include Microsoft Azure (currently in beta) and Google Appengine, you also have the PaaS purpose built frameworks such as Adobe Air and MS Silverlight, additionally some charateristics of PaaS include;

The potential areas and intelligence for PaaS developers to exploit within its architecture is immense, for example if you take a PaaS built application the developers in almost real time can interogate and investigate every intricate detail on what consumers or users of the application are doing and what they want from applications, this is mainly due to the fact that the PaaS services hosting the SaaS applications are running across the internet and across various service buses.

From a security standpoint this is very important to consider if you are considering using a public PaaS cloud provider such as Microsoft Azure or Google Appengine, in theory cloud providers have the ability to obtain complete knowledge on any data stream that goes through the Platform that is hosting your SaaS built applications, I compare this in simplistic terms to them having full access to rummaging through your Private databases. I guess that certain laws prohibit this and to succeed in the world of compliance they wouldn't, but this is certainly one issue in regards to security and cloud that is not completely acknowledged and known and the hatchet buried.

Death of the OS?

Last comments from an Infrastructural viewpoint is the fact a lot of peeps believe that PaaS will be one of the strategies in Cloud that kill the current generation of OS as we currently know it. My sceptical view is first incarnations of PaaS will most certainly not replace the OS, to succeed it will need an underlying platform able to be compatible with current dev frameworks. Additionally we mostly do not have programming frameworks which are capable of not completely being able to run without using resource management features in the typical OS to scale.

Longer term prediction for the next 2-3 years we will possibly see PaaS applications being hosted as with current datacentre services upon JeOS or Tailored cut down type OS's like Ubuntu JeOS and in some respects Oracle Unbreakable Linux (The below diagram provides depicts this), these provide the bare minimal footprint required to start just limited services and supportive services such as Apache or the relevant proprietory app/db and are finely tuned. 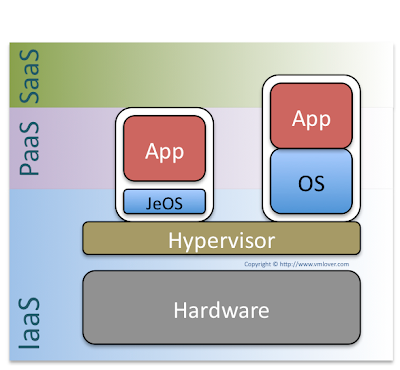 The "Just Enough" operating system strategy certainly leads to some interesting thoughts on what will emerge and how architecture like this will affect the underlying IaaS model. Google as an example of this appear to be concentrating more on Dev Framework and API, they see the OS and Virtualisation as a barrier to achieve more for scalability of Cloud based applications and for certain application workload thats scales out such as Web apps I agree with this. Web based services scale horizontally, and growth of this at the scale being demanded even with streamlined approaches to Infrastructure delivery within IaaS can still be a problem, however if you remove the dependancy on the OS this means that speed and agility is less of an issue for the application but at what cost in other areas of the datacentre? that is the question and maybe something to discuss in further posts.
Summary
So there is my partial view on PaaS and what I believe it will shape to be (no sniggering please), my advice is if you are serious about looking into using PaaS and strategy similarily internally I seriously recommend you talk and discuss strategy with your incumbent Application Architects/Gurus. Emerging trends like Microsoft Azure are now being pushed by the industry marketing machine, this means that you will suddenly start to find a massive sideways approach to adoption by current application teams adopting without you even knowing which will leave the complete department at a quandary.
# posted by Daniel Eason : 20:27  0 Comments

The product video shows some screendumps (although the women narrating sounds a bit strange) which is quite cool and has similar features seen in a lot of the cloud managers.

We do seem to have an emergence of these with Players like CohesiveFT and Eucalyptus being the dominant players, I will probably have a look into this and post some reviews/comments on it.