Since my last post where I discussed the Microsoft Azure cloud service and highlighted that I felt companies competing in the cloud space such as VMware are now diversifying past the Hypervisor to reach aspirations of Cloud, and then Vmware go and do me a favor and make me look like i'm a visionary and extrememy intelligent and buy Spring Source!!!.
I have had all week to digest the views and opinions from various Industry analysts and bloggers and see what they are thinking and saying in general on the Spring acquisition and now heres my attempt (ARSE COVER DISCLAIMER - I am not a Software Architect/coder/guru/white sandals & sock wearer so excuse any rubbish) at trying to predict where the purchase will lead VMware's current business model and what will evole from the acquisition, lastly I also highlight what the industry needs from any of Vmware's clouds offerings.

VMware are now kick starting themselves into providing multi tiered service offerings, and with the latest acquisition are slowly creeping up the layers and stack past just the underlying Datacentre Virtualisation technology. This natural growth is mainly I feel due to demand from the industry and current customers for more agile cloud based services and coverage across more of the datacentre.

The Springsource acquisition enables Vmware to move into the PaaS (Platform as a Service) market, this effectively means that they can provide organisations with an end to end operational stack starting from the underlying Virtual Machine workload, through to the presentation layer for orgs to run JVM type workloads and webservices. With this solid framework VMware can provide presentation layer building blocks alongside technology such as vApp and they go further than providing just the solid underlying platform infrastructure which is present within the VDC-OS intiative.
Customers can also benefit from the confidence instilled through partnerships and alliances formed in the Datacentre virtualisation boom with the likes of EMC, Cisco, IBM and HP. What will also attract any customers is the fact that Spring is open source and common knowledge to most people in development meaning any future developments and offerings won't be a closed shop like Azure (We Hope). Overall within the cloud space I believe VMware will probably have the competitive edge to attract Enterprise customer base when pitched against other competitors in this space such as Microsoft and Google. This is mainly due to current core datacentre infrastructure values and them being the company respected as being the ones to establish the defacto baselines for capable Server Virtualisation and consolidation products.

What does this mean for an Infrastructure bod?

Some people maybe asking themselves (like me) "Well VMware have bought these guys what does that mean to me and my current investments in VMware technology". From my observation the Spring acquisition isnt going to be a tactical point purchase like Propero, Beehive and Dunes, I see Spring being the key driver for Vmware to start to be able to provide a sustainable reputable driven cloud based offering for current enterprise based customers and for new potential customers that would be considering Azure and Google Appengine. Looking at available hooks within Spring and by the Spring.NET and I presume you will even extend and be able to use the app components available upon Microsoft Azure services which is a very smart move if this happens, this will mean you will have the flexibility to run certain components on alternative clouds and not be locked into using the complete end to end VDC-OS stack.

Below is a self compiled diagram which includes my vision and picture of what architecture within the VMware suite may start to look like, you might think its a load of rubbish and if you do then please pass comment, however I feel we will have an emergence and movement now into Cloud being accepted more and more due to the capability of VMware having a open framework and the capability to host the application being hosted anywhere with the massive scalability options such as being able to burst workload on demand for more required capacity and utilise and offer your organisation standard machine building blocks with vApp and Virtual appliances. 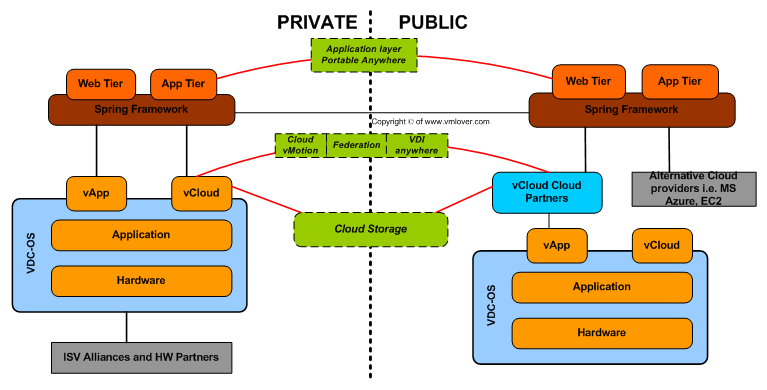 The future vision
VDC-OS is quite clearly going to be VMware's stack for hosting cloud workloads privately and publicly, to provide openness within the industry VMware will have the OVF Format to ease hosting virtual workloads upon multiple carriers and vApps within the VMware space to define building blocks and provide metadata on any whereabouts of objects.
All of these items which are being provided today will ensure that transition into a Cloud Architecture will be achievable and cost effective and I sincerely hope it won't mean a complete throw away of your underlying existing Virtual Infrastructure, and I would hope you will have ease of portability to other platform providers if you want or have an need within your enterprise to do this.
Within the VMware strategy I think to succeed the industry needs some of the following ideas and functionality in future from cloud with Vmware;

I am going to go over some of my predicted possibles in more detail in future posts once the dust settles with the Spring acquisition but one of the prime benefit that I can see to this is the possibility that we may start to shift into VMware building defacto affordable Middle/Web stacks just as Redhat do with JBoss. This may additional mean that we will move away from the performance and tuning arguments and issues of running certainly Java workloads within VMware machines, we move away from the issues of ISV compatibility and also away from the expensive licensing infringements to use DRS and Multiple hosts for our benefit that the likes of Oracle impose.

Well thats enough babbling and digressing for one post, hopefully I have raised some possible avenues that will arise for organisations on yet another acquisition that VMware have made. This one is certainly an eye opener and it is going to be very interesting to see what the vibe is like at VMworld 2009 on what direction VMware are now moving into, and lastly it will be very interesting to see in 6-12 months time how VMware shape as a company with such a diverse acquisition.
# posted by Daniel Eason : 09:47